This weekend was my grandma’s 87th birthday (!!) and the one thing she always requests is cheesecake. It’s one of the few things she still has an appetite for, and it’s always so cute to watch her dig in.

While I had dreams of making a beautiful scratch cheesecake, my day just didn’t pan out like that, and I found myself at the grocery store scrambling to pick something up that would suit the different diets at the table.

I haven’t tried many vegan pre-packaged desserts, since a) I enjoy (simple) vegan baking, and b) they are usually pretty heavy on ingredients and calories.

When I saw that Daiya has a vegan New York “cheezecake”  in four different flavours though, I was interested enough to pick up a box.

Available in strawberry, blueberry, chocolate and key lime, Daiya’s Dairy-Free New York Cheezecake is an indulgent dessert that can be served as is, or used as a base for your own creations! In addition to being vegan, the pies are super allergy-friendly with no dairy, soy, eggs, peanuts or gluten.

I chose the key lime flavour because it’s a favourite in my family. I brought the cake home frozen from my Loblaws Superstore and allowed it to thaw for about five hours before serving.

You could easily serve these with your own toppings or decorate them for any occasion. I dressed mine up quickly with a simple lemon zest and some toasted coconut pieces! 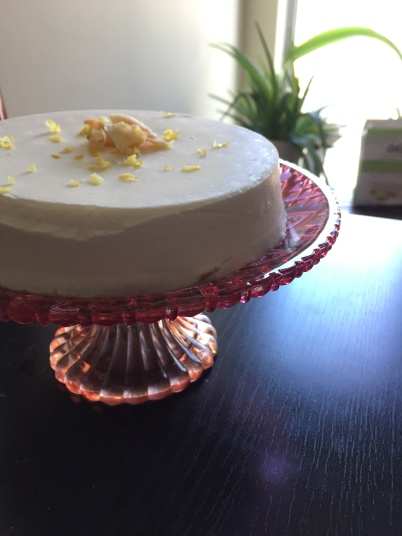 The filling includes creamed coconut, vanilla and cane sugar. While less crumbly than a traditional New York cheesecake, I actually preferred the texture and lightness of the vegan cake.

The crust, which includes coconut oil, brown rice flour and sorghum flour, was lighter and dryer in texture than a typical graham cracker crumb and butter crust.

As for taste? This cake gets a huge thumbs-up from me. I would definitely buy it again for a special occasion. It was delicious! The tartness of the key lime juice kept the sweetness in check and made the dessert refreshing instead of heavy. Cut into bite-sized squares and dusted in coconut, I think this would make a tasty summer bbq dessert!

The nutrition label lists a serving at a hefty 360 calories, so this is a decadent treat for sure. However, I realized that the serving size of 100g is equivalent to 1/4 of the entire cheesecake. You could definitely get away with a smaller slice! I likely ate half of the suggested serving and felt satisfied.

When the need for a cheesecake arises again, I’d like to try my hand at a homemade version. But in a pinch, this was definitely a home-run.

Do you have any prepared vegan desserts that you buy from the grocery store?